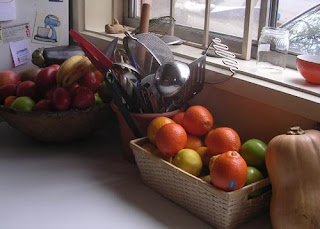 Each YamDaisy café will be a similar small café, seating about 30, aiming to sell over a hundred meals a day and making sure each one is delicious and made from scratch from local, seasonal food. Each menu will have the structure of the SOUP, 2 MAINS and a FRUIT DESSERT. Each YD Café is overseen by the YD Franchise which makes sure they are accountable to this structure. However, there is room for flexibility as these examples show. This flexibility will give vibrancy.

A YamDaisy café in Langdon, might find that most of its customers are busy professional people and quite well off (and pay the higher price) and who are used to eating a wide variety of foods so couscous, polenta, curries make the menu easy. A lot of these are vegetarian, and many are interested in organic foods, so there is always vegetarian food on the menu and the customers are understanding about food not in season being absent.
However, there are many people with chronic illness and disability here, and many old people, especially women living alone after the death of their husbands. Langdon has a strong Greek population from long before it became a yuppie suburb. The chef at the Langdon YamDaisy Cafe would be catering closely to these people who would use the café more often.
Perhaps some of the elderly Greek women would meet together once a week for a good dinner at the YD Café and then most of them would also get soup to take home that day for the evening. The chef would get to know people who are struggling and talk to them about their particular food needs, and might put their favourite meal on for their birthday. And, knowing some of those elderly Greek women, there might be some fierce arguments about the recipes and the flavours of the food!

A YamDaisy café in Drumont would have a very different community to cater for. This is the place of new cheap houses on the edge of the city and young families struggling with big mortgages and little children and insecure employment. Although young, they might be the most conservative eaters, only liking the most familiar and anglicised dishes and would need to be seduced into a meal that is mostly vegetables.
They may also be the people most used to processed food and the big junk food corporations: both parents and children battling with obesity and illnesses like diabetes and heart disease.
The chef at the Drumont YamDaisy Café might need a careful menu and to build up a lot of trust before trying a ‘Moroccan Special’ or a ‘Traditional Turkish Dish’. She/He might sneak extra veggies into the pasta sauce and give playful names to dishes to help make them attractive. People with chronic illness and disabilities might be especially isolated in this area of poor public transport, limited community centres and privatised everything, so the YD café might be a real hub where those people can meet and talk while getting good meals they can afford.

A YamDaisy Café in Chumlen would be different again. This is an old poor area close to the city with lots of public housing and boarding houses. There is a new influx of refugees, especially from Africa, and a growing Indian population, plus another 40 nationalities! The YamDaisy café in Chumlen might find a complex clientele where poverty and chronic illness are the lot of almost everyone who comes to the café. The vibrant populations that do more community cooking of their own may not use the café, but people who have never learnt to cook, and who come in most days would be more common. This area may have more transient populations too. The chef here might need more of an understanding of complex social issues and have good networks with local health workers, but also find great appreciation of the delicious food that takes such a burden off the daily lives. Chumlen might need three YamDaisy cafes!

The YamDaisy Franchise will have an important role with support including nutrition ideas, debriefing, mentoring, conflict management, networking with local organisations, or whatever is needed. The Franchise can undertake important research. They can document and share the things that work, reward initiatives that work, and commiserate with those that don’t! The chefs may get a lot of support from their community, but sometimes it will be a thankless task (as most parents know,) of working to provide delicious nutritious food and getting complaints and rejections in turn. The Franchise needs to make sure the chef/managers get the appreciation and encouragement they need. It will be a vibrant franchise!
Posted by Unknown at 11:52 PM