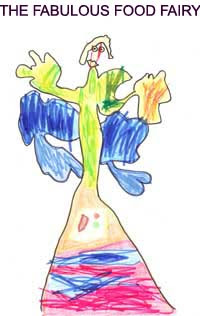 I began the Comfort Food Poll after I had been talking about the YamDaisy Cafe idea for a while, and had some feedback that cheap nutritious food would not be attractive to potential customers. It sounded too much like aching jaws and boring vegetables.
Even when I talked about delicious, nutritious, local, seasonal food made from scratch on the premises....
No, said some, people want junk food.
So I came up with the idea of finding out for myself - by asking people what they want to eat when they are hungry and tired.

The Question
"You have had a hard day, you are sick, tired and hungry. The Fabulous Food Fairy says "Sit yourself down and I will make you a lovely comforting meal. What would you like?"

I asked this question in my website, on the Facebook 'Comfort Food' Page, in my Community News Sheets and I asked most people I met.
I did mean to do more publicity, my local newspaper would have published an article for me, but my health has been bad the last few months and so I wasn't able to extend the idea.

However, the 70 or so results were very interesting! I quickly saw that the range was SO wide that one dish could probably not be counted a winner. If I did count it that way, Roast Lamb would be the winner, closely followed by Chicken Soup, Vegetable Soup, Pumpkin Soup, and Macaroni Cheese.
But there were variants within, one chicken soup had noodles, another had vegetables, another had dumplings and so it went.
I have ended up putting them into broad categories which seemed to indicate the favourite types of food better.

I had to work out what to do with pasta bakes, there were a couple of lasagnes as well as another pasta bake, so I counted them in both categories!
There was also a love for potato mash, it appeared as part of a meal over and over again.
Pies were popular, especially from British contributors, and toast soldiers with soft boiled eggs appeared too.

Most of these comfort foods came from Australia, indeed, most came from my local community around Melbourne, and they do show that the sort of comfort meals that people would ask for, are exactly the sort of food that would be served at a YamDaisy Cafe.

Ofcourse we did have someone nominate chocolate! And another would simply want pavlova... but it is truly overwhelming that most people chose delicious nutritious meals.
You can see the contributions on the Comfort Food Facebook Page
And at the Comfort Food page on the YamDaisy Website

What comforting food would you ask the Fabulous Food Fairy to make for you?