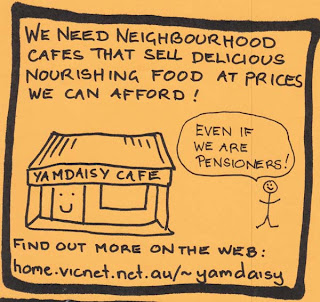 My last post was all about running a successful cafe. The information came from Ken Burgin who has had decades of experience in the Food Industry and runs workshops for people who are thinking of starting a cafe or restaurant. Check out my post here.
The interview ended with Ken Burgin being asked what food business he would choose if he could start up one now.

I will get to his answer in a roundabout way.

I came up with my idea of YamDaisy Cafes from the point of view of someone who needed help with meals (because of chronic illness) and someone who was used to providing meals to large households (previous to chronic illness!). But I didn't have much of an idea of the Food Industry side of it, and I needed to be sure that my YamDaisy structure was sustainable as a food business.

I looked around to find someone who could give me information, and was first helped by a lecturer at William Angliss, a top Melbourne Hospitality College.  He opened my eyes to so much: industrial equipment, working out profit on percentages, and some serious stories about life in this strange world.

When I asked if he thought chefs would be interested in YamDaisy Cafes with my idea of a fair income, and fair conditions, and everyday (delicious) food, he was quite inclined to think chefs could be. But not the young ones, starting out, that I thought might jump at a situation that was well supported and not too expensive to get into. No, he thought it would appeal to those who had had their time of late night craziness in the restaurant world. People who might want to sleep at night, people who wanted a bit of normalcy.
Close early, he said.

Shortly after, what should I see in my local paper, than an article about a chef who had worked in a most prestigious restaurant, but was now in our little suburb, running the local organic cafe.
'He will have lots of experience useful to me!' I thought, and up I went to see if he would talk to me. He did, and I was very grateful because he didn't have much time.
I learnt more about industrial equipment, I got to look at the store room, ask the questions and get similar cautious support and kind encouragement. Same opinion that few young chefs would be interested in my idea.
And why was this skilled chef working in the little cafe in the shopping strip?
He had a young family, and he wanted to be home in the evenings.

I am not such a slow learner. I went home and worked at my YamDaisy structure. How to get meals to people and let chefs work ordinary hours? I pushed back dinner time at my cafes so that it was still open for early diners like people with school kids, and then lots of beautiful take-away for people to buy to eat later.
6 p.m. closing.
(Okay. Maybe someone could be there a bit later to keep selling takeaway and close up)
But I made the core of the service be lunch through to early dinner with room for flexibility if the chef might choose it.

And now, let's get back to Ken Burgin and this question: "If you were to open a food business in Melbourne today, what would you choose?"
This is what he said:
I would want one that opens early, closes by 3, and is Monday to Friday.
Why? So I could have a life!

Well Mr Ken Burgin, I am about as close as I can get to your perfect food business!

To find out more about my YamDaisy Cafe idea, check out the website.

Note: The illustration at the top comes from the Community News Sheets I produced last year to let my local community know about my YamDaisy idea.

And finally ~ I will be so interested to hear what you think of this post! Were you surprised?