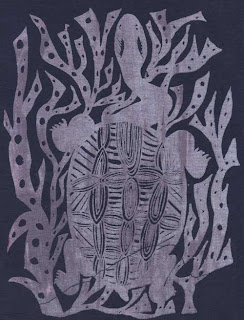 This beautiful design comes from a cloth I bought from the women's textile group at Borroloola when I was teaching there.
Borroloola is in the subtropics of Australia in the Gulf of Carpentaria.  These long necked tortoises lived in the lagoons and hibernated in the mud.
But my favourite turtle experience when I was up there was seeing two huge green sea turtles mating (!) in the sea as our boat passed by them.

(I am using turtle and tortoise interchangeable as they mean generally the same thing used differently around the world).

Turtles took on a real importance to me a decade later when I used them symbolically.
I had left work because of my bad health... but I wanted to do something!  I decided to start a community development project for people with CFS (Chronic Fatigue Syndrome/ME/CFIDS) in my area.

But I knew I had to manage it carefully for the sake of my own health and for everyone who got involved.
I thought of 'Slow and Steady' wins the race and decided to call it the Tortoise project. That name would be a continual reminder for me to take it slowly and never to take on more than I could do.

What a difference to most of my community development work! It usually consisted of crisis after crisis and deadlines rushing at me headlong!

I thought I would be very slow and getting things done, and I was philosophical that going very slowly was better than not going at all.

But what I discovered was something quite different!

Tortoise behaviour: going step by careful step, actually resulted with things happening at a very good pace. With no crisis, no rushing to get things done before deadlines, less shortcuts and decisions made on the run, the project developed wonderfully!
Every decision was the best decision that could be made. Holding back and taking time to consider meant we moved forward in the most efficient, productive way!

Noting the same kind of philosophy by the Slow Food Movement I dubbed this style Slow Community Development. I champion it every chance I have! (Like this one!).

Thankyou turtles!
Posted by Unknown at 1:11 AM