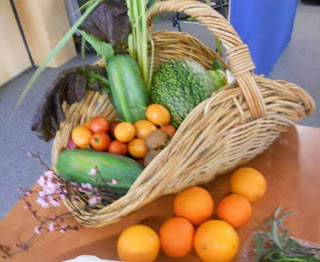 When I spoke to the people at the Local Food Conversation last Sunday I focused on the local, seasonal food used in the menu at the YamDaisy Cafes (ofcourse) and this was a nice change from focussing on business, health and the delicious menu (not that I mind talking about them!).

1. Isolation, poverty, difficulties with food:
It is an awful thing that as well as coping with whatever awful chronic illness you might have, you almost always have the added burdens of greater poverty, isolation, and difficulty preparing food for yourself and your family. The YamDaisy Cafe idea helps ease these burdens for people with chronic illness, disability, or anyone struggling.
(Yes, I know there are other burdens... housing being a most serious one!)

2. An idea as big as Macca's:
When I had my idea of small local cafe's selling delicious, healthy food at prices pensioners could afford, I thought I only had to let people know, and they would say "Ofcourse!" and get my YamDaisy Cafe idea going.
But no! So I have spent 4 years working on my project with my webpage, my blog (this one!), my YamDaisy facebook page, my Comfort Food poll, and with research.
It is a big idea, I think it could be as big as Macca's! And now it is time to get a pilot cafe up and running.

3. Small menu:
The aspect of my YamDaisy Cafe that makes it different to other Cafe's - and more like mum cooking, is the  soup, 2 main meals and a fruit based dessert on the menu each day. And it is like the BEST 'mumcooking': cooked from scratch with fresh, seasonal produce.

4. Local, Seasonal Food is integral to the idea:
I have entertained the idea of doing a deal with a huge supermarket chain to get this project going, but I rejected it because the Best Practice for a mum cooking for her family has to be the use of fresh, local ingredients. Wanting good health outcomes and deliciousness - as well as convenience- making use of small local producers has to be part of the model for YamDaisy Cafes.

5. YamDaisy Cafes can be good for local producers
As a business that is committed to local ingredients the YD Cafes can be a wonderful support and generator of local produce. This could include backyard producers as well as people running larger or more specialised businesses.

I gave out my little homemade cards so people could look up my webpage and like my facebook page
NOTE: Please everyone! 'Like' my YamDaisy facebook page! It is my best indication of how much support my idea has, and at the moment it only has 27 followers (Precious people every one!)

And I had my presentation folder available for people to look at. (I am working on how to share it here).

I am so pleased to say that there was lovely feedback from people there!
The very first question was "Will there be take away?" (Yes!) Thinking of those busy nights for busy families.
And when I said that my next step was to talk to local Councillors to say if they would get behind the idea for a pilot cafe I would find the money.... And then all I would have to do is find the million dollars! Someone said "How can we help you find a million dollars!"

In the nice chatty bit of the meeting when people were milling around and eating, I had to sit down, but it was lovely that I wasn't left alone and people who came and chatted and looked through my book showed such serious support for my project and gave such good feedback.
It was great to get hear that the model would suit small local producers.I left the meeting so bouyed by the great feeling of good stuff happening and that there was a swell of support for my idea.

(So it has been a bit frustrating that it has taken a week to write this blog, sigh! But slow and steady will win the race!)

The picture above shows the display on the food swap bench last Sunday, and below is my (1st draft) business card! It's onward and upward now! 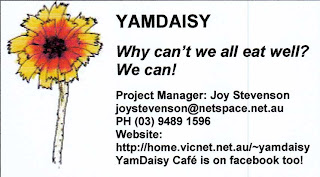