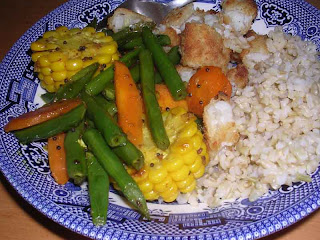 This delicious curry has been sitting in my files for several years. It comes from Margaret Fulton, one of Australia's National Living Treasures and Super Foodie.

I gave it a try because of the beans I had bought. These were lovely fresh green beans, but cheaper because they had been mechanically harvested, and this meant they would not keep as long. So I made up a big curry of veggies and then ate it in all sorts of lovely ways until it had gone. It is so easy and tasty! I must have had it with four or five meals and still wasn't sick of it.

It would be a great YamDaisy recipe!

It kept well in the fridge and warmed up to deliciousness on the following days.

I used corn chopped into pieces instead of the cauliflower in the recipe, chard from my garden instead of spinach, and the only other change I made was to use 1/3 cup of oil instead of 1/2 a cup, which was plenty.
O and I cooked it in the wok instead of a large saucepan. Now you know you can change those things back if you want!


MIXED VEGETABLE CURRY
1/3 cup of oil ~ heat in a wok and add
1 tbsp fresh grated turmeric (or 2 tsp ground)
6 - 8 curry leaves
2 cloves garlic, crushed
2 cm grated ginger
pinch chili powder (cayenne)
Fry for a minute or two
Then add
2 fresh corn cobs sliced into rounds
250g green beans in short lengths
1 carrot finely sliced
And fry over medium heat until half cooked but still crispish
Add
6 chard leaves torn into pieces
And fry for about 5 minutes
Then season with salt, cover, and cook on low heat for 2 - 3 minutes.
There is enough steam for the veggies to cook to perfection.
Isn't it easy! If you don't have curry leaves you could just make it without.
In the picture you can see it served with brown rice and a crispy fish fillet, but it is hard to think of something it wouldn't go with!

Yum, I will be making it again soon!
Posted by Unknown at 9:54 PM