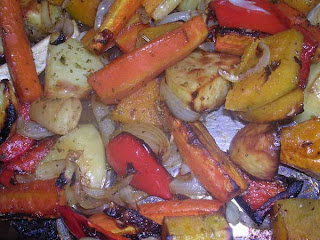 The first part of Simone's wonderful menu is here


Roasted Vegetables and Braised Pork Belly
I talked a little in the last post about coaxing this menu out of Simone when she was in the middle of moving house. Well, as I begin talking about her second main, you will see how this has come back and bitten me. She said roast vegetables, and was thinking about what to have with them... by then my conscience was pricking me and since I had just roasted a couple of chicken legs I jumped in and suggested roast chicken. "Fine" said Simone.

It was a little bit after this that she told me that she was a vegetarian, and so she would never have chosen a chicken to go along with her roast. Sorry again Simone!

And it was when I started thinking about this post I realised that I keep popping chicken in these menus because I want to cater for meat eaters and, being a vegetarian myself for so long, I am really ignorant about meat ~ except I am cooking chicken sometimes and learning about it. However, after my experiment cooking chicken legs I have to admit I have no idea how I would serve bits of them with the roast veggies.

I thought to myself that since Simone didn't choose the chicken, maybe I could change it for some other meat, and just grabbed braised belly of pork out of the ether! When I went searching for what it is actually is ~ it sounded a bit more complicated than I expected, and I realised I was just getting deeper and deeper into things I am totally ignorant about! O dear!

I had to have a conversation with my friend Lin about whether it was something that could be considered for a YamDaisy menu, and really, how big a bit would end up on the plate?
Lin calmed me down and I can picture now a plate with a lovely bright array of veggies and a succulent square of pork, and maybe a nice smear of apple sauce. Yummy?

I just love to make roast veggies, crispy with caramelised edges and all their colours were bright and glistening. I love making a big tray of these because they make such wonderful left overs! It is easy to be creative with the mix, but this is how I did this lot: 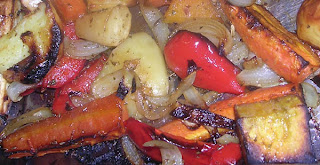 Put the oven to high heat.
Pop in a baking tray that will fit your veggies in one layer, or as close to that as possible.
In a big bowl, peel and chop your veggies. I used potato, parsnip, carrot and pumpkin. I made them only a few centimetres square (not that anything was that regular) so that they had lots of surface area and so they would cook quickly
Then I added some thinly sliced onion and chopped red pepper to add extra flavour.
On top of these I drizzled some olive oil, soy sauce, a bit of golden syrup, and lots of dried oregano.
I mixed this all up so that every piece of vegetable was just coated with the oily mix.
Next get the very hot pan out of the oven and tip the bowl full of vegetables in it. It makes a great hiss and crackle!
Shake or push the veggies a little so that they cover the pan evenly, and pop it back in the oven.
After almost half an hour I gave the veggies a mix, turning them over as much as possible, and after another 10 minutes they were ready.

And are you surprised to find I didn't actually cook the braised pork belly myself? But I looked very carefully for a recipe that looked delicious and possible for the YamDaisy menu. Here is what I found: Braised Pork Belly


Apple and Rhubarb Crumble and Creamy Yoghurt
The YamDaisy Cafe philosophy is all about 'Made from Scratch!' For anyone who takes the shortcut of using tinned pie apples for their apple crumble, the difference in a YamDaisy version will be a revelation! Apples are in season at the moment, and the bright, sweet, flavour of fresh stewed apples makes it most understandable that this is such a popular dessert. Adding rhubarb adds another level of flavour and colour!

Simone's topping for apple crumble has the butter rubbed into flour, and then the additions of allspice, almond meal, and oats, with the sugar. Drained Greek yoghurt makes a thick creamy counterpoint.

It is really cold and grey and wet in Melbourne at the moment. Winter has set in. How wonderful to have a menu so full of warmth and colour! I think everyone walking past the Cafe would have to come in and eat! This is a menu that will nourish body and soul!
Posted by Unknown at 7:03 PM