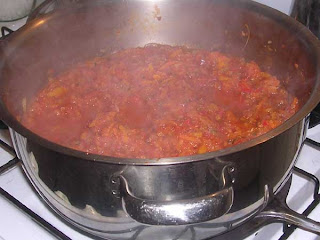 
Vegetarian Pastitsio
I was so excited to make the pastitsio and share it with you. When I first read Yiota's menu I had no idea what pastitsio was, although when I saw pictures I realised I had seen it before: http://en.wikipedia.org/wiki/Pastitsio
It seemed a perfect dish to make into a vegetarian version and I made a big vegetable sauce that my food processor makes very simple. I roughly chopped up 2 onions, 2 garlic cloves, 4 small apples, a zucchini, and 2 red peppers and 6 dried tomatoes that had been soaked and then chopped. I minced them with the steel blade of my food processor and put them in a big pot with heated olive oil (about 4 tbsps).
While they began cooking I put the grater attachment on my foodprocessor and grated 3 carrots and 4 celery stalks and added them to the mix.
Next goes in 2  400g tins of diced tomatoes and a teaspoon of salt, and then the whole big potful needs to simmer for about three hours. For the last hour I added 500g of chopped mushrooms. Once it was simmering happily I put the heat diffuser under it and only had to give it a stir now and then. It ends up so thick and soft and tasty! I added a little freshly ground cinnamon right at the end, and it really added a magic touch to the whole dish.

I had a couple of serendipitous events. My good friend Lin said out of the blue that she had made pastitsio the weekend before, and how wonderful it was. So I told her that it was on Yiota's menu and she sent me her recipe.
Also Mary at One Perfect Bite posted a recipe. She wasn't completely happy with hers, so I concentrated even harder on making this a good one!

Apart from the sauce, I followed the recipe Lin gave me:

Preheat oven to 180c. Brush a 6.5cm-deep, 26 x 33cm (base measurement) ovenproof dish with oil to grease. Add the breadcrumbs and shake to coat.
Cook the pasta in a large saucepan of salted boiling water until al dente. Drain and return to the pan.
Meanwhile, heat half the oil in a frying pan over medium heat.  Add half the mince and cook, stirring, for 3-4 mins or until mince changes colour.  Transfer to a heatproof bowl.  Repeat with the remaining mince.
Heat the remaining oil in the pan and add the onion and garlic.  Cook stirring, for 5 mins or until the onion is soft. Add the mince, passata, water and cinnamon and cook, stirring, for 5-8 mins or until the sauce thickens slightly.
To make the béchamel sauce, melt the butter in a saucepan over medium heat until foaming.  Add flour and cook, stirring for 1 min or until the mixture bubbles. Remove from heat and gradually add the milk, stirring constantly until smooth. Place the pan over a medium heat and cook stirring constantly until the sauce thickens. Remove from heat and whisk in the egg.  Season with salt and pepper
Add 310ml (1 ¼ cups) of the béchamel sauce to the pasta and stir until well combined.  Place half the pasta mixture in the prepared dish.  Spoon over the mince mixture. Top with the remaining pasta mixture.  Spread the remaining béchamel sauce over the top.  Sprinkle with parmesan. Bake for 45-50 mins or until golden.  Serve. 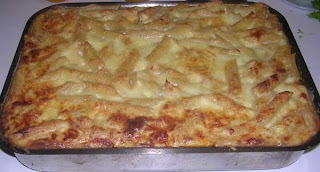 I wished I had just one more centimeter in the tray as I was scared to put all the sauce in! Next time I will put less pasta on the bottom level so that more sauce can sink in to it (is this a good idea pastitsio makers?) But for my first effort I need to serve it with some added sauce that I didn't fit in! Making the bechamel and mixing it into the pasta worked really well.
But let us pretend I got the ratios right and serve it here with some lovely braised green beans for the YamDaisy cafe! 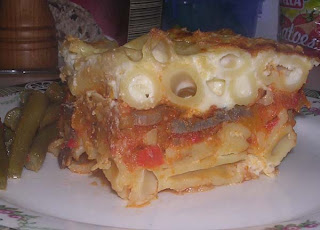 Cherry Pie
O yum! How much the short cherry season is loved around the world! It will come to Melbourne in November. I think the YamDaisy Cafe would want Cherry Pie on the menu at least once a week as long as the season lasts!
Since I cannot make it at them moment I can link instead to a mouthwatering cherry pie I have seen on the beautiful Cherrapeno blog: http://www.cherrapeno.com/2010/07/fresh-cherry-pie.html

Thankyou Yiota for a menu that inspired me so much, gave me new dishes to add to my repertoire, and that are such a pleasure to share with everyone else. These dishes are just what the YamDaisy Cafe idea is all about! Delicious, seasonal, mouthwatering, not fussy... but heartwarming food to the people you are feeding.

Good wishes to everyone!
Posted by Unknown at 5:58 PM