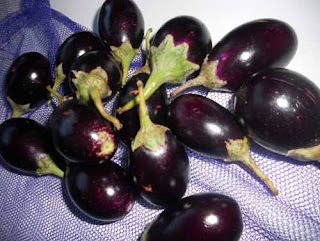 There were more beautiful eggplants at the greengrocers this week. Teeny little baby ones! So sweet.

I searched through my cookbooks to find a suitable recipe. I was a bit worried, because I have worked out the tongue-bitey-ness I find in eggplants is in their skin, and I have taken to peeling them as much as possible. But how could I peel these sweet little things? Their gorgeousness would be gone!

I found a recipe that specified baby eggplants (and was sugarfree). I had made it before but with large eggplants and almonds instead of cashews, and noted it as YUM! Time to try again with all the right ingredients.

Here is the recipe from Tyler Florence:
Baby Eggplants in a Curry Coconut Sauce
and HERE and HERE are a couple of blogs from people who have made it.
It worked really well! 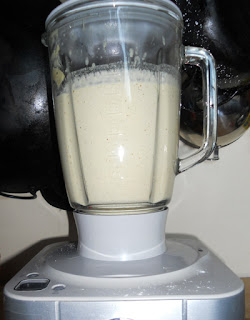 The sauce is so tasty and so thick and creamy and the eggplants get so smoky and sticky charred, so that when the two come together the result is fantastic! I just cut the little ones in half. And once cooked there was no tongue-bitey-ness! 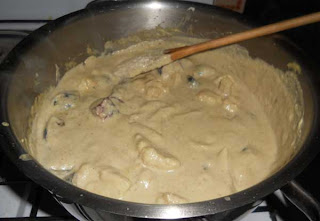 I wish I had taken a picture of the eggplants frying as that would show the two parts that come together. O well.
In fact, I added some cauliflower towards the end because it seemed by eggplants were even babier than the original, and I could have had twice as many. The cauliflower was a good addition though! And I lucked out with the timing so that it was cooked perfectly by the time the eggplant was done.
I used oil for frying the onions, but kept to the ghee for the eggplant.
Even with the tablespoon of curry powder, this is a very mild curry.
Thinking about serving this in a YamDaisy Cafe... well, the smokey and creaminess is fantastic: but it could be confronting to some tastes! It is also quite rich, and so better as a smaller potion. So while it is a lovely vegetarian curry and a complete meal served with rice and green leaves as suggested, I have added a piece of roast chicken so the curry serves more of a side dish and could be easier for people to try. 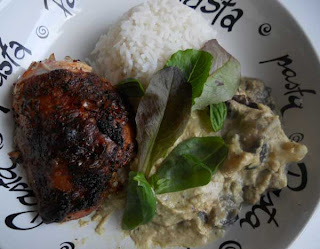 (not the best photo ~ sorry)
Once they try a couple of mouthfuls, of course, I'm betting they will love it as much as I do!
Posted by Unknown at 3:44 AM