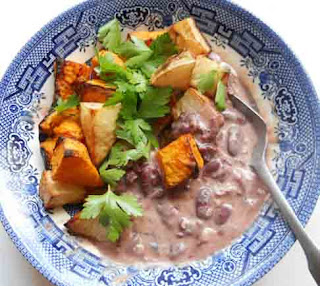 Here is my blue plate again! Full of the last of the Punjabi Rajma with roasted potato and pumpkin and some freshly picked parsley to garnish. Perfect! (It is sort of related to this post!)

When I first went to college, studying to be a teacher, I was such a wholefoods vegetarian type that I completely avoided the cafeteria. EXCEPT for one pleasure: The apricot pie. These were small pies, no doubt bought bulk, frozen and heated until the insides were molten and then left int the pie warmer until the end of the day.

My main memory is of buying a hot apricot pie and sneaking it into a lecture one cold hungry day. I remember the delicious taste of the apricots against the pastry and the challenge to avoid burning my tongue and also avoid getting drips of apricot filling over my notes. An altogether satisfying memory of food at Toorak Teachers College in the late 1970's ~ and probably just as well that it is my only one!

I dropped out of that course, but in the '80's I tried again and finally completed my Teaching at Bendigo. O Enlightened times! The cafeteria was there selling tired chips and sad other junky things as usual, and lots of soft drinks (but no apricot pies if I remember rightly!). But in the other corner of the Student Lounge was the health food cafe! I can't remember what it was called: Green something probably!

Truthfully.... it was not much better. I didn't bother with the salads there, they were so much tireder than the ones we made at home. An occasional piece of carrot cake (very ordinary, a bit oily) with a coffee is my memory from there, and, well, it isn't nearly as good as my apricot pie experience!

My WORST memory of college food came in the late 1970's when I went on a trip to Northern Europe with the Architecture students at RMIT. We stayed at a university in London and the vegetarian meal I was given consisted of a thawed pizza (a horrible one) topped with instant mashed potato.

So here is another plug for my YamDaisy Cafe concept. Instead of the college tendering out to whatever company sells food cheapest, they can put in a YamDaisy Cafe and get fresh, seasonal, delicious food that gives the students health and does their brains some good too!

And those red kidney beans with roasted vegetables just might be on the menu!
Posted by Unknown at 7:48 PM