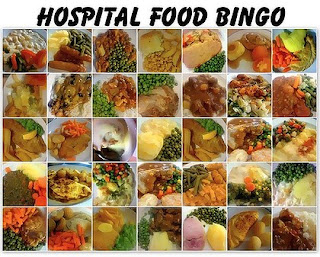 This is the first of some YamDaisy posts inspired by my friend Maree who has given me a whole progression of interesting feedback about my YamDaisy idea.

I will begin where we began: with Maree stuck in hospital and disgusted with the hospital food.

(The picture above comes from an article in Sydney Morning Herald about Traction Man's blog. He is a journalist who was stuck in hospital and wrote about the horrors of the food. He has recuperated enough to be at home now, but you can find his blog here: Notes from a Hospital Bed.)

It was Traction Man's blog that made me realise the YamDaisy Cafe model could fit perfectly well into hospitals (like the Macca's in Melbourne's Royal Children's Hospital but much better!).

It could be an extra, that served visitors and those staff and patients who could get down to it... But there is plenty of possibilities for a greater role than that. There could be one on every floor, or in every wing. Or maybe there could be several in the hospital, one catering to people with allergies, another catering to religious food restrictions. In some places it would be possible for a YamDaisy Cafe to supply all the meals for hospital patients. There is enough flexibility in the YamDaisy Cafe model to make it suit a whole variety of contexts!

That is why, after I had commiserated with Maree, I invited her to look at my YamDaisy Cafe Website and tell me what she thought. I asked the right person! Maree has run several food businesses, building them up and looking to Franchise them! So much so that I have several more posts to write exploring the things she raised, and then the YamDaisy Menu she has given me, that I will share with all of you.